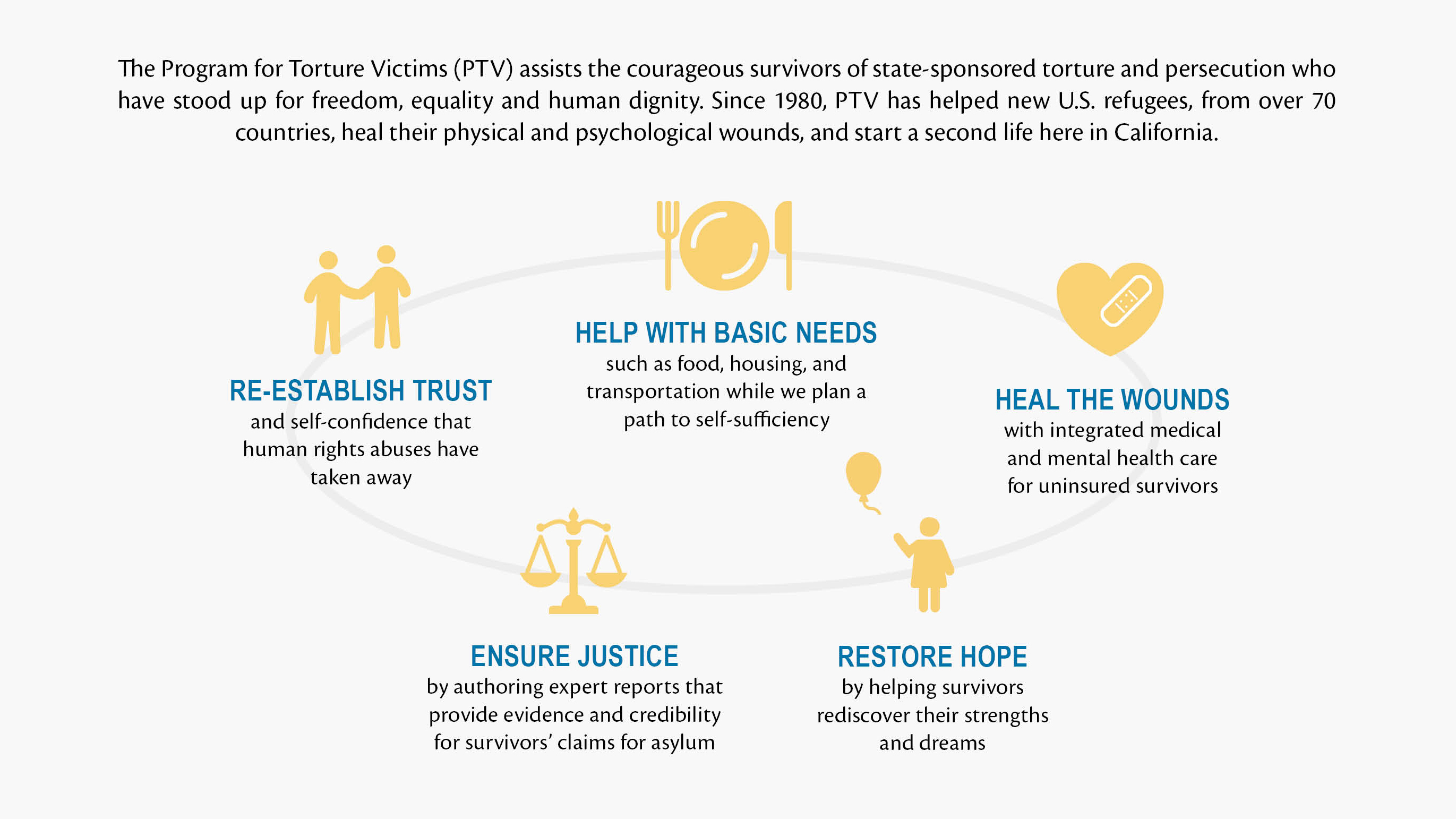 As the pioneer in torture rehabilitation, PTV has developed an integrated and successful approach to healing survivors. More than 80% of our survivors have untreated Post Traumatic Stress Disorder (PTSD) due their the violence they or their family endured. Our mental health program includes individual and family psychotherapy, psychological evaluation, psychiatric evaluation and follow-up care.

PTV provides medical care to survivors regardless of their access coverage. At our PTV Human Rights Health Clinic at USC Eisner, our physicians provide trauma-informed care. We also utilize our network at USC and other local healthcare organizations.

PTV works with an extensive network of attorneys and legal aid organizations to ensure high-quality legal assistance for our clients. Our staff conducts forensic medical and psychological evaluations, serves as expert witnesses for asylum cases in federal immigration proceedings, and for human rights or war crimes trials in international courts. Additionally, we provide training to attorneys, federal immigration officers and judges.

Our holistic and integrated approach to healing also includes massage therapy, chiropractic care, acupuncture, art therapy, and theatre, which are provided through our innovative partnerships with local teaching institutions or by dedicated volunteer professionals.

PTV provides comprehensive case management service to meet basic needs such as emergency cash assistance, food, and clothing. Our peer support groups create a sense of community for clients, allow them to share experiences, and empower them to become spokespeople against the use of torture.

PTV holds programs and utilizes social media to educate the community about the global use of government sponsored torture and persecution and its consequences. We also engage elected officials and policymakers to help combat human rights abuses and advocate for resources to facilitate the healing of survivors and to reunite them with their families.

By Robin Schoenfeld Our PTV community really loves a home cooked meal, and fortunately we have a whole globe’s worth...

By Carol Gomez As PTV continues to weather the pandemic head on, one of the most pressing issues facing our...

By: Abigail Amaya and Tara Kwan Seeking asylum in the United States is a long, stressful process. Fleeing from war...

Once a week I join a PTV Zoom peer group chat, facilitated by our Clinical Director who is a psychotherapist...

When Katerina and Diana, two of PTV’s clients, sat down to talk about resilience and how it’s featured in their...

What would it be like to cast your ballot on election day knowing that you could be spied on, beaten,...

Meet Bakti, Religious Persecution Survivor from Bangladesh When Bakti came to PTV, he wore his mental and physical fatigue like...

Meet Ahmed, Survivor from Afghanistan Ahmed hasn’t seen or been with his wife and three daughters for 9 years now....

Meet Faizah, FGM Survivor from Uganda Faizah grew up in Sudan with the expectation that all girls would undergo female...

Meet Yacoub, Survivor from Mauritania For years, Yacoub moved from country to country seeking reprieve and refuge. Mauritania has been...

Meet Rehema, Women’s Rights Activist from East Africa On any given day, you’re likely to find Rehema buzzing away at...

Meet Adriana, Survivor from El Salvador Adriana grew up in Central America, a region which has one of the highest murder rates...

Meet Hassan, Survivor from Syria When the protests first broke out, Hassan, like many of his fellow citizens, looked at...

State-sponsored torture is the intentional infliction of severe mental or physical pain or suffering by or with the consent of the state authorities for a specific purpose. Torture is often used to punish, or to take revenge on a person or persons or create terror within a population. It is used to intimidate, repress and dehumanize. Contrary to television shows and movies, torture is rarely used to obtain information. It is used to break the human spirit. It is used to instill fear in populations and keep regimes in power at any cost.

Some of the most common methods of physical torture include beating, electric shocks, stretching, submersion, suffocation, cutting, burns, amputations, rape and other types of sexual assault. Psychological forms of torture and ill-treatment, which very often have the most long-lasting consequences for victims, commonly include: isolation, threats, humiliation, mock executions, loud prolonged sounds, mock amputations, and witnessing the torture of others.

Very prevalent. Even though illegal by international law, more than 110 countries were documented by independent international organizations as participating in acts of torture during the past decade.

What is the difference between torture and persecution?

Persecution is the systematic mistreatment of an individual or group based on religion, ethnicity, sexual orientation, gender or gender expression. It can be carried out by a government or encouraged by a government and carried out by private citizens. If a government instigates violence through policy or laws aimed at individuals of a particular religion, ethnicity, sexual orientation or gender, and someone in that class is abducted and assaulted due to government instigation, then it becomes a form of state-sponsored violence. The Rome Statute of the International Criminal Court makes state-sponsored persecution a crime against humanity.

Who are the victims?

Anyone can be a victim of torture or persecution – children as well as adults, young as well as old, religious as well as atheists, straight or gay, intellectuals and the uneducated alike.

Nobody should be considered immune, although being a member of a particular political, religious, ethnic group or minority may set individuals aside as targets for government endorsed violence. Frequent targets include:

Who are the perpetrators?

State sponsored torture is inflicted by or at the instigation of or with the consent or acquiescence of a public official or other person acting in an official capacity. Those most likely to be involved in torture include persons such as:

In the context of armed conflicts, torture and other forms of ill-treatment could also be inflicted by:

What are the effects of torture?

The biological and emotional consequences of torture reach far beyond immediate pain. Many victims suffer from post-traumatic stress disorder (PTSD), which includes symptoms such as flashbacks (or intrusive thoughts), severe anxiety, insomnia, nightmares, depression and memory lapses. The emotional after-effects of torture cause isolation, hopelessness, a loss of trust in other human beings, and the inability to form relationships or keep employment. These effects become insurmountable barriers for new refugees to thrive in a new society and a new culture. That is why torture rehabilitation is so vitally important.

Torture victims often feel guilt and shame, triggered by the humiliation they have endured. Many feel that they have betrayed themselves or their friends and family. All such symptoms are normal human responses to abnormal and inhuman treatment.

Victims of torture do not suffer alone. Victims’ families and friends are also greatly affected. Local society is damaged both through the trauma inflicted on its members but also through an instilled awareness that basic human rights are neither guaranteed nor respected. Freedom is not respected. People are not respected. The use of torture sends a strong warning to those within a political, social, or religious opposition, but also to normal citizens who cannot rightly claim to live in a free or safe society.

BE THE FIRST TO READ

Sign up with your email address to receive news and updates

YOUR DONATIONS SUPPORT OUR CRITICAL WORK