At the end of last month we celebrated two landmark holidays for survivors with an evening of food, drink, and live music. Attendees also heard about the work PTV does firsthand, from both employees and survivors. 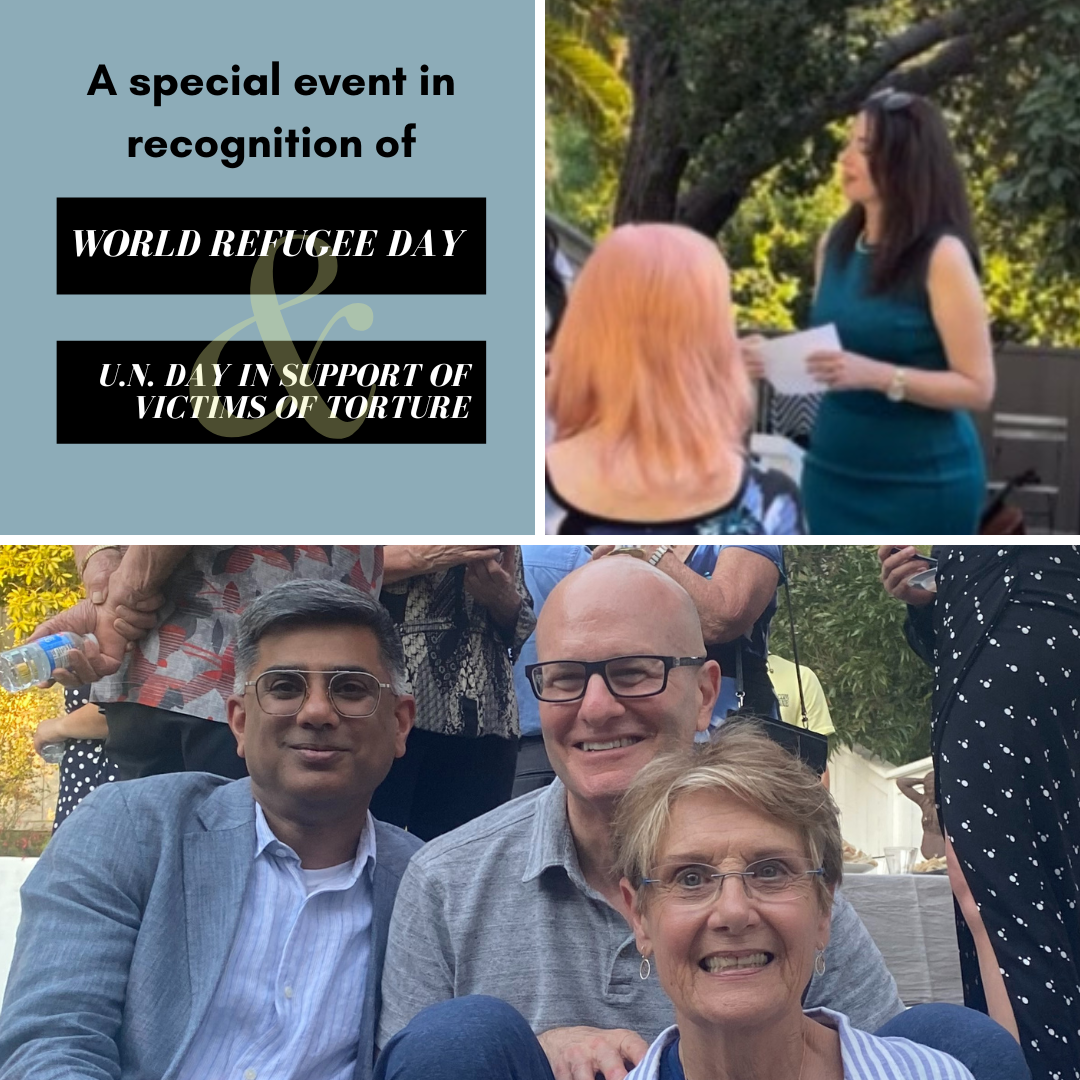 Thanks to all who joined us on June 26th to commemorate World Refugee Day and U.N. Day in Support of Victims of Torture! These important international holidays mark the persistent issues of torture, immigration, and seeking asylum in countries across the globe. World Refugee Day marks the commemoration of the 1951 Convention on Status of Refugees, which 101 years later remains relevant as political climates and changing environments force people to leave their native countries.

We heard from PTV survivor Roland about the experiences of modern persecution and torture. He shared his story of facing fear for his life in Cameroon, forcing him to flee and journey through Central America to seek asylum in the United States. Roland’s harrowing journey out of Cameroon demonstrates the difficulty of immigration to the U.S. before any paperwork even begins to get processed. To quote Roland describing his experience traversing the jungle of Panama, “We lost both men and women in the jungle which were bitten by snakes and other animals and some fell sick and could not move anymore. In my group, we lost more than 100 people in the Panamanian jungle. I myself was in the jungle for 7 days with no food”. After finally reaching the border, Roland came into contact with PTV and “made me have hope again”. His moving story not only recounted his past but looked forward to his future with hopes of becoming an electrician. PTV’s invaluable work and talented physicians and therapists helped assist him in building his life here in Los Angeles and becoming comfortable in sharing his story with others. Through this small event, we raised over $11,000 for survivors like Roland. Your giving and attendance at this event and donations helps make these transitions for survivors possible!

Thank you to Nacho Arimany and the ensemble (@nachoarimany) for providing very moving live music to accompany the evening. And thanks to Erica Deutsch for hosting the event in her lovely yard.

All of the proceeds from the event will go directly toward PTV’s life-saving services to restore the health and well-being of torture survivors who are now seeking asylum in Southern California, home to the largest population of survivors and asylees in the United States.

PTV’s work has been recognized by the City of Los Angeles and the State of California and the United Nations, and our pioneering co-founders are international leaders in the field of torture rehabilitation.

Thank you again to all you contributed. We deeply appreciate your gifts and support!  If you were not able to attend, you can still make a difference in the life of a survivor.

More than 4 in 10 refugees and asylum-seekers living in the U.S. experienced torture in their home countries. As the...

PTV board member and Clinical Professor of Law at the University of Southern California Gould School Of Law spoke with A....

Read about PTV survivors and hear from staff in this multi-media KCET article written by Lata Pandya, as she follows the stories of...

PTV client, Ben Nganoah, shares his story with GoBankingRates.com on what it was like to flee his home country with...

PTV APPLAUDS THE BIDEN ADMINISTRATION President Biden’s signature on the executive order rescinding the Muslim Ban on his first day...

The Biden/Harris Administration will take a new approach to asylum seekers. The next president will need to take urgent action...

Many of us love John Oliver’s hilarious and informative takes on key issues in American life. This time, he’s talking...

SUPPORT THE HUMAN RIGHT TO SEEK ASYLUM AT THE US BORDER Last week the Trump Administration instituted a policy that bars all...

Photo Credit John Moore/Getty Images OPPOSE SEPARATING CHILDREN FROM THEIR FAMILIES AT THE BORDER JOIN PTV IN SUPPORTING THE RIGHT TO...