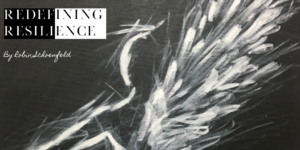 When Katerina and Diana, two of PTV’s clients, sat down to talk about resilience and how it’s featured in their lives as asylum seekers, the dictionary seemed like a promising place to start. (Well, that, and the goodie bag of excellent chocolate they’d brought to share! Everyone really started off by enjoying a chocolate hazelnut truffle, and so we were all smiling!)

We mulled these meanings over. The first sounded a bit too much like “Just get over it!” to feel positive, and the second definition gave us a good time pantomiming springs and rubber band at each other, but still did not really satisfy. As a full definition for the idea of resilience, neither of these explanations felt complete. Luckily, Katerina was struck by a sudden insight.

“Wait, who would want to go back to being exactly the same shape, after going through a challenge?  Where is the growth in that? There HAS to be transformation and growth for there to be true resilience!”

This, everyone agreed, felt like a truer definition, and much more in tune with what an asylum seeker goes through in the United States. An asylum seeker’s resilience can only be developed through a process that is necessarily life changing, while it also draws upon all the toughness and elasticity an individual can muster. No one who goes through it can ever return to whom or what they once were.

So how would Diana describe tapping into her own sense of resilience, since leaving Russia? Her face immediately lights up.

“When I am painting, working with the colors to make something beautiful, all of my stress just…leaves me. I don’t worry, I don’t have to think about everything that has been difficult. All I’m thinking about is sunflowers, or a big field of red poppies, and how I’m going to show what I see and feel about them, using my paints and my brushes to put them on the canvas. Instead of feeling bad, I can make art!”

Diana hasn’t always been an artist.

“Back in Russia, as a little girl, I loved to draw and paint, but once I reached about ten years old, I was told I needed to grow up, concentrate only on my studies. I had to think about how I was going to earn money as an adult, and I was wasting everyone’s time if I was doing something that wouldn’t lead me to money. So I just stopped doing the thing I loved best. I felt terrible and I cried a lot, which everyone told me was a waste of time, too. I was called crazy for wanting to paint, crazy for always being unhappy, crazy for crying so much.”

How did that change? Diana leans in as if to confide her secret:

“First, I was able to escape to this country, and then…I found Michael’s!” Katerina nods wide-eyed confirmation of this. “Oh yes, she certainly did!” There is a burst of laughter, then Diana continues.

“They have EVERYTHING in that place – it’s like the museum of art supplies! First, I went into the store only for visits, just to look at it all. But as soon as I could afford to, I bought myself paint, brushes, paper. I brought it home, opened everything up, went into my room and then I just PAINTED, for hours and hours!”

She shows us some cell photos of these first paintings; vivid brush-strokes bursting into fields of flowers, expressive, vibrant portraits of individual blooms – all the images saturated with life and color.

“When people saw these,” Katerina remarks with pride, “they began asking her to paint pieces for them, they wanted her pictures to hang in their homes, their offices. Diana has the best eye for design! In our home, we have some decorative things that we picked up here and there, nothing expensive. But Diana moves these pieces around and makes interesting arrangements with them, so that everything looks amazing together. She makes our home so beautiful!  I don’t know how to see things in the way that she does, but to her it comes naturally.”

Since coming to the US, Diana has worked as a photographer, a graphic designer, and in interior design. Being free to express herself visually, and feeling valued for her expressions, has been transformative for her.

“So now, when I’m making art, I know I’m doing something useful and beautiful. That is very different from how I lived before! And why would it be wrong, or crazy, or a waste of time to make something beautiful?” Because she can now express herself fully with her painting, she finds she is more able to express herself in other ways. “I can speak up, talk about it, if something is bothering me. I’m not bursting into tears anymore. It is easier to be who I am, here.”

“For me,” Katerina adds, “Learning the English language also gave me a way to express what was bothering me. I found so many new words for feelings, which I did not have in Russian. Today, if I want to tell you how I’m feeling, I can find the words very quickly in English. Yet, I really have to think about it to express the same ideas in Russian. I almost can’t do it. But the truth is that in Russia it was much better not to feel anyway, so why would I want to talk about feelings?”

Katerina’s path to self-expression was further sparked when she noticed a dance studio opening in her L.A. neighborhood. “I didn’t dance or try gymnastics as a child, though I always wanted to. You need to show you have immediate talent to get to do that in Russia, it’s not something you do just because you like it.” But the athleticism, power, and grace of the dancers she observed in their classes called to her.

“I really needed something to take my mind away from things. Going through this asylum process is really difficult. It wears you down so much because you can never be sure you’ll come out safe in the end. The stress is unbelievable and it’s hard not to be obsessed with all the things that are out of your control, about what could happen if your case gets denied. When I saw the dancers doing all these gymnastic moves, climbing and twisting and swirling around on a floor to ceiling pole…it was like a ballet, but they’re suspended in the air!  You could that tell they needed all their concentration, all their strength and skill to do their routines, and I knew I wanted to try this, that maybe this would work for me.”

So Katerina signed up for a class, which became a weekly series. Before she knew it, she was going to class twice a week, and then expanded her schedule to three times a week. Soon she had progressed to taking advanced classes, then she was dancing at the studio five days in a row.  But did this really help with the stress?

“For sure! Immediately, I found I could sleep sooo much better!  Besides, instead of just worrying all the time, now I could be thinking about making my dance routine flow more smoothly or trying to work out in my head how a new move was done.” The dance studio started to change her perspective in other ways.

“In Russia, I had to be very independent. I was sure that no one was going to help me, or be behind me, but myself. Just to survive there, you couldn’t be seen as vulnerable or weak in any way because you’ll be used and exploited. But in the Studio, I could see how these women were making their own community together. No one was jealous or critical, everyone was encouraging, everyone acknowledged that we were doing something challenging and just trying to improve together. Also, at the end of every class, the instructor would ask us all to name something positive that had happened that day. And sometimes it might be about a breakthrough in class, like the day I could flip myself upside down and back again, really smoothly, because that isn’t easy, at first! But other times we could share something more in depth about our lives if we wanted to, and then everyone would actually listen and be supportive! That felt like a whole other world for me, very different from what I knew before I came here.”

Eventually, and much to Katerina’s surprise, her dancing progressed so much that she was asked to represent her studio in a competition. “That was just unbelievable to me, but everyone was so positive that I could do it, and they really encouraged me to believe in myself.”

“But, you have every reason to believe in yourself!” Diana points out to her. “You are really good!”

“Well,” Katerina acknowledges, “Diana had faith in me from the outside, which was a big help, but I was still new to being a dancer, and now I was going to compete?  It felt a lot harder at first to have faith in myself, on the inside!”

Diana shakes her head with a smile.  “Katerina danced beautifully in that competition, maybe even better than she usually does.  Her ‘outside’ was perfect!”

“And having Diana there to support me was so important, because then I could find what I needed inside to dance my very best!”  Katerina is quick to add.  “You know, one of the strongest sources of our resilience is our relationship.  It’s so important that here in the United States we are able to be together, and give that support to each other.  It means that the two of us have the ability grow and transform as ourselves, and then we can also grow together as a couple.”

“Together,” Diana agrees, “We are strong, and…” She gestures an imaginary rubber band stretching between her hands, “able to come back.  But always we have grown!  So, that is our resilience!

Voting Against Maduro Led to Persecution for the Valera Family